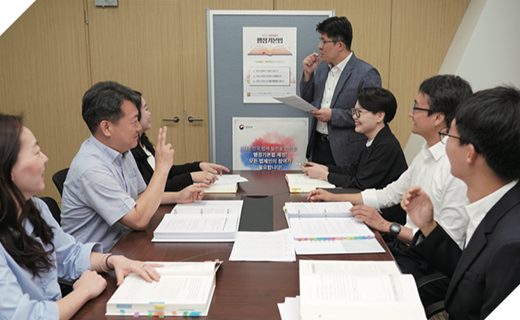 The Ministry of Government Legislation, as the Central Administration Organization specialized in legislation, supervises and supports the government's legislative activi- ties of each department from the governmental and com- prehensive prospective.

We establish and enforce governmental legislation plans and support the government's legislative activities. We supervise the legal administration of government: for example, we ensure that subordinated statues and regulations, such as executive or ministerial ordinances are prepared at the appropriate times, or submit the examined bills and bills passed by the National Assembly to the Cabinet Council. Also we mediate differences of opinions among departments so that unified opinion is proposed at the parliament.

In order to make sure the 100 key government projects, which are practical strategies for the policy visions and objectives, are smoothly implemented, we strengthen legislative support and inspection and management system for 465 laws and 182 lower statutes that are required to be legislated or revised.

Legislative coordination on the bill under deliberation at the National Assembly

Support on consultation between the ministry and office concerned and the relevant authorities on the proposed bill, and operation of the Governmental Legislation Policy Council help resolve differences between them so that unified opinion of the government can be proposed at the National Assembly.